When it comes to giving a psychic reading, it is rare these days that I see someone in person. I have an international clientele, so more often than not, I am either on the telephone or on Skype with my clients. For those that may be closer to me in proximity, the demands on my time eliminates the possibility to see those clients in person. This, of course, has not always been the case.

I don’t know when my preference to give telephone readings began. For years, I told myself that I didn’t want to be around someone else’s ‘energy,’ for fear that it may influence the messages, but the following incident that occurred years ago, I’m sure, was part of my decision to do less and less in-person readings.

One summer afternoon, I received a telephone call from a young woman who sounded desperate, and was in need of a reading. She was in the Air Force Reserves, and was being housed in a local hotel along with others, and she asked me if I would meet her at her hotel room to give a reading. It was a policy of mine not to go to a new client’s home, so I denied her request for the reading. She asked if I would at least meet her at the public library’s conference room which was five minutes away from my own home. I agreed, but that gnawing feeling in my gut told me that something wasn’t quite right. I should have listened to that feeling.

As I got out of my car, and walked toward the library, I saw a young woman dressed in uniform. She was waiting near the door, and eager to get started. Although she looked polished, the energy of her was scattered. I was already hesitant of spending one hour with this new client, but since I had committed myself to it, I walked through the doors of the library, and into the conference room.

I pulled out my tarot cards to do a three-dimensional reading. It’s a method I created to draw out the details of one’s life, and predict near future events, and the like. This young woman told me that she, too, knew a little about tarot.

So, what was her desperate need for a reading? Her love life she told me. She was having a meltdown, and needed me to look into her love life. After she asked her specific questions about it, I began my reading.

The Devil card was the first I pulled. In my head I am thinking of a sociopath, an abuser, a Dr. Jekyll, Mr. Hyde type of personality.

I looked at the woman knowing she herself was the devil, and she said, “That’s right.”

After a few minutes into the reading, I focused specifically on her love life. I told her that even though there was a man she was interested in, she wasn’t in a relationship with him, nor would she ever be. Why? Because he was a married man, and happily in love with his wife.

The young woman came unglued. “I know, I know!” she screamed. That “B” (Referring to his wife), if she wasn’t in the picture, I’m sure he’d ask me out sometime.

“When is he going to leave his wife?”

I wanted to look into other areas of her life. The more I read, the more things about her became clear. Sexual abuse, torture, and extreme situations came up. All in which she confirmed.

I spent the entire hour feeling sick from the reading while the client, from time to time, ranted about the man she was interested in.

“Again, he is not going to ask you out. In fact, he’s communicated that to you already.” Although she confirmed that she had asked him out for coffee, and he made it clear that he was married, and not interested, she wasn’t going to take no for an answer.

Finally, the reading was over.

As I gathered my things up to leave, the young woman began ranting again. This time, she held her hand up in the air as if holding a knife, and began a stabbing motion in the air.

“Sometimes,” she said, “I just want to kill somebody.”

I left feeling relieved that I had not gone into the hotel room to do the reading. Perhaps, I thought, that I would have become that “somebody” she wanted to kill while stabbing me with a real knife.

Following that reading, I was very particular about who I read in person. If there was the slightest ‘feeling’ about it, I simply refused to schedule that person’s appointment with me.

I will always remember that knife in the air. The stabbing motions, and the look in the woman’s eye. A valuable lesson learned in this psychic’s life. 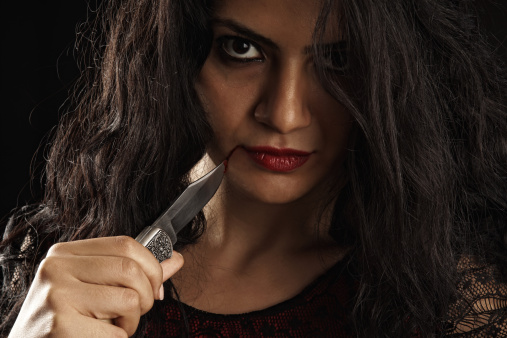